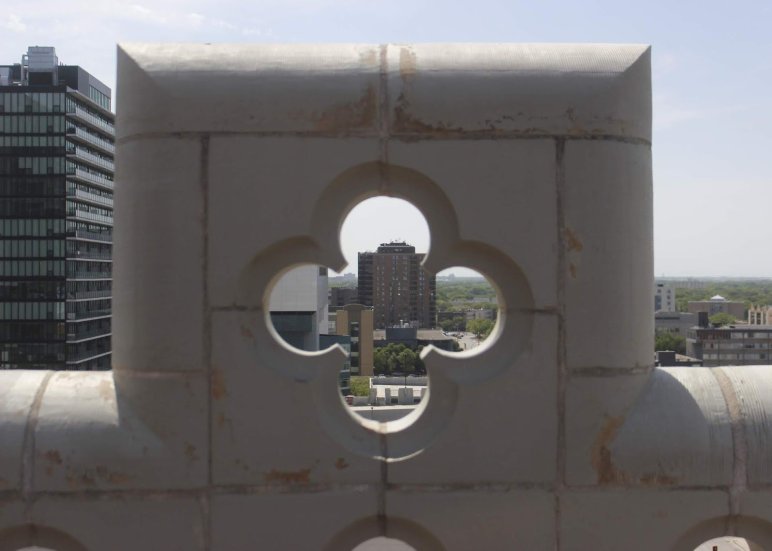 In art and design the quatrefoil is an important and frequently used element. I don’t know too much about them but I enjoy them for their simultaneous blend of simplicity and complexity. A quatrefoil consists essentially of four overlapping equal-sized circles, with variants on that theme. Like a meander or a spiral, there is an innate optical pleasingness in looking at a quatrefoil and that is one of the reasons why it is a fundamental of visual art and design.

Both the quatrefoil and the spaces between its evenly aligned ranks and files are visually soothing. Looking at these shapes scratches an itch in your brain, the one you did not realize you had until it got scratched.

I think. I did not look all of this up on Wikipedia, nor have I studied this in the past nor do I have special intuitive knowledge powers (“super genius stuff”), like some C- grade undergrads from Wharton. Wharton is in Pennsylvania. I think.

Four. 4. Quarters. Quatro. Four anything can be represented by a quatrefoil. Four lads from Liverpool, the Ninja Turtles, four ripe plums, or four asteroids in orbit around one of the nine moons of Endor…

Today, I have four good things to talk about. I have listed them as Quatrefoil One through Four:

Nice people are overrepresented in the business of fiction. Thank goodness. If it wasn’t for the nice people, I would lose my mind because this writing shit is super genius stuff and that means, for me—a non-graduate of Wharton undergraduate studies, Cambridge University or Endor (or any of its moons)—it is hard as f*ck!

Quarrel One. The diamond-shaped pieces between adjacent quatrefoils are sometimes called “quarrels”, especially in a description of fenestration — like the stained glass windows in the King’s College at Cambridge. (A place, like Endor, where actual “super genius stuff” takes place.) Quarrel is a fine word and so I’ll use it here to describe the fillers I have inserted into each space between my four good things. Each of the three quarrels will describe something about quatrefoils. There is no extra charge for these trequarrels of sublime, intermediary (or interlocutory, cuz that is also a fun, six-syllable word) information.

I am able to enjoy the lake we live next to in almost any condition. If it is warm, I can swim in it. There’s fishing, but somehow I don’t get around to that much. In summer, on calm mornings, I can row across its surface. When it’s really windy, I can windsurf. Windsurfing is basically a showing-off activity so when I am out windsurfing I am thinking super genius stuff like: “I bet those people sitting on the dock over there would be prett-ty-prett-ty impressed if they knew that I’m a GD pensioner!” Meanwhile, the person on the dock is actually busy wondering if Regina really does rhyme with “vagina” or whether that Canadian guy was just having them on…

Quarrel Two. A quatrefoil arch is a common feature in gothic architecture. Cathedrals are loaded with ’em.

Quatrefoil Three. I have work out soon in three exceptional Canadian publications and one based in the U.S.:

On Sunday, July 19th, at 2pm Pacific time, I’ll be part of a virtual (online) launch for Pulp Literature Issue 27.  The launch will be on PL’s Discord server channel, and I hope you’ll be able to join in. Just like an in-person launch, there will be door prizes and chances to chat with the authors, who will be reading from their work. The event has contributions from Denmark to Western Australia. But none from Elbow. (Saskatchewan… there may be one from Elbow, Ontario, though — home of the Elbow Roughriders.)

August will see the launch of a new issue of Agnes and True, an exceptional Canadian online literary journal. I’m super genius excited to be in this market and can’t wait for folks to read my story, “The Grittiness of Mango Chiffon”, a tale of fashion, warmth, and redoubtable resolve.

I’ll be returning to Just Words, the annual anthology of fiction, CNF, and poetry from Blank Spaces, a production of Alanna Rusnak Publishing. This compilation will be out in September. https://www.facebook.com/blankspacesmag

My pick-up truck saga, “The Sunshine Girl” will shine its ever-lovin’ light on Cowboy Jamboree, sometime this fall. “An interesting slice-of-life vignette…” according to Editor Adam Van Winkle.

“A grit lit rag promoting fiction in the vein of Donald Ray Pollock and Larry Brown and Dorothy Allison and the like.”—Cowboy Jamboree, About.

Quarrel Three. Are quatrefoils lucky? Do they have special, magical powers? Do they stay crunchy in milk? I don’t want to influence your religious beliefs or otherwise stray onto private property but I’d say quatrefoils are never considered unlucky.

Quatrefoil Four. Drumroll, please. My grant application to the Manitoba Arts Council | Conseil des Arts du Manitoba has been accepted! My proposal to produce a Manitoba artbook will be going ahead as soon as Covid-19 allows free travel around the province. My collaborator, photographer Phil Hossack, and I will work together to create an ekphrastic collection of Manitoba-based short fiction and photography. The three-part theme we want to focus on: People, Place, Light. We’ll travel the province to gather extraordinary stories and pictures from ordinary folks.

More on this project soon, but for now, please let me know if you have a Manitoba location, a person, a story, or if you know someone with a printing press sitting around not doing much. These are all things we could use!

Manitoba is endowed with remarkable people. From Louis Riel to other famous individuals like Gabriel Roy, Cindy Klassen, Miriam Toews, and many, many more, there are lots to choose from. There’s also a plethora of the not-so-famous—but just as interesting. It’s predominantly this latter group we hope to meet and share with our readers, though story-telling and visual arts.

Our province is one of diversity not just in the origins of its people, but in its geography too. The North, the prairies, the boreal, rivers, lakes, a great city and numerous smaller communities with singular stories to tell and show. Manitoba places make for fascinating discovery and study.

Sunny Manitoba. As every Manitoban who has spent time out of the province knows, it is our light, both in terms of the vast size of the sky over the flat prairie landscape, and its year-round abundance that makes the sun’s absense felt most acutely when we are away from home. Whether it’s sitting on a Whiteshell dock in the unfading light of a late June evening, or waiting impatiently for the sunrise on a frozen January morning, Manitobans’ relationship with daylight—with the sun—is special and unlike any other place. So too, light plays a dominant role in the art of photography and we believe that by paying special attention to light in our photos (and in our fiction!) we’ll uncover truths that may otherwise have gone, uh… unilluminated.

So that’s it. Four cool things. A quatrefoil.

5 thoughts on “The Quatrefoil”